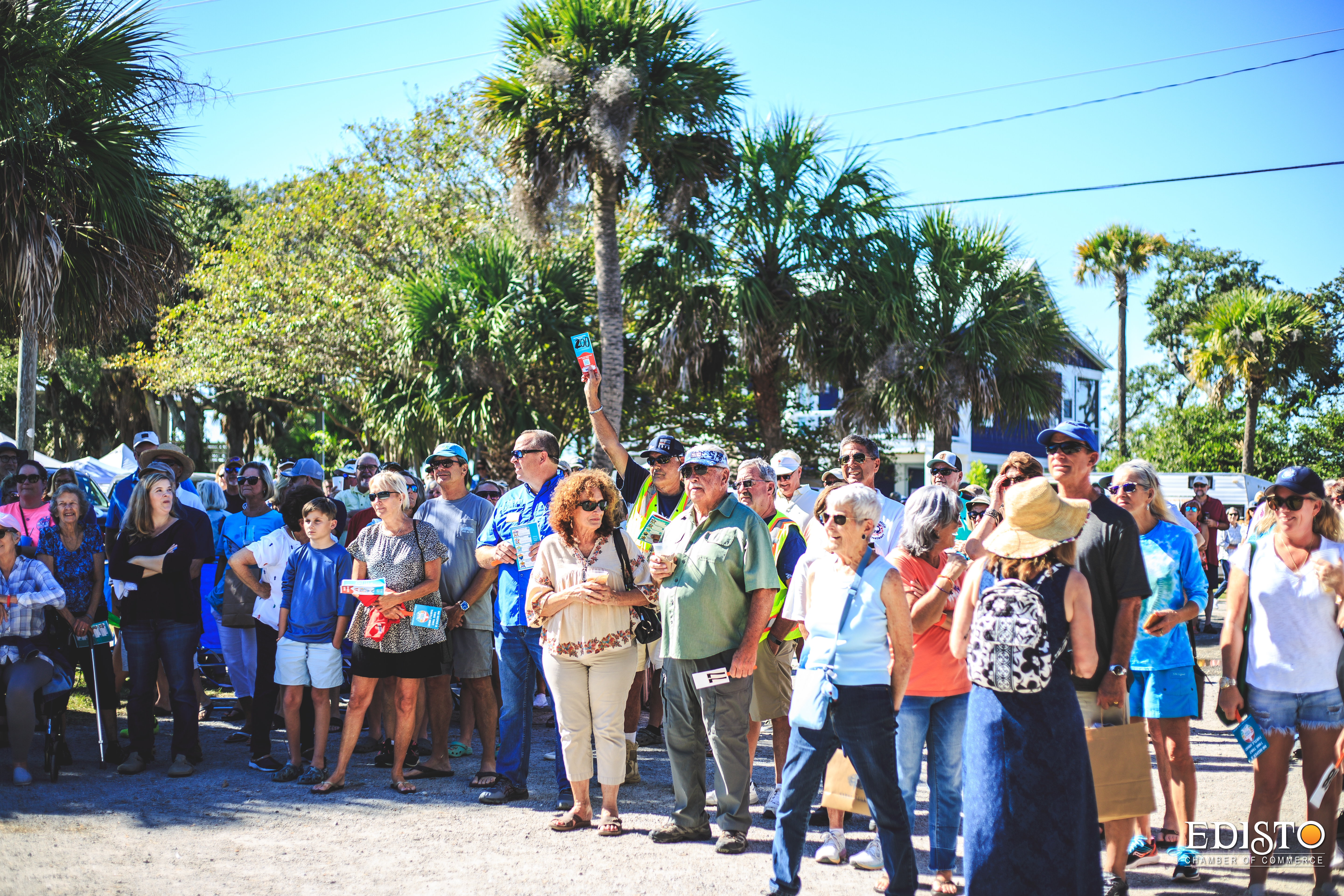 The Edisto Chamber of Commerce hosted the very first Turtle Tide Art Auction in conjunction with the Edisto Fall Festival last Saturday, October 15. It was a perfect Fall Day at Edisto; the sun was shining, the band was playing, and more importantly, people were feeling generous. 10 turtles were auctioned off, raising over $60,000 to benefit eight local non-profits.

The fee to become a turtle sponsor was $1,000 per turtle. Since it was the inaugural year for the Turtle Tide Art Project, no one knew what to expect, but hopes were high on what each turtle would bring. With 100% of the proceeds going back to the designated non-profit for each turtle, anything would have been considered a win.

The auction was set to begin at 2:30pm. Bidders had to register beforehand and were given auction paddles with bidder numbers. It was a slow start for registration, but by 2:15pm, all 60 paddles were out and we had to start making more. In total, we had 70 people register to bid.

Local business owner Peter Beck volunteered as the official auctioneer for the event. He talked a little about each turtle, the sponsor, the artist, and the non-profit associated with it. Peter went over the mission of each non-profit and explained how they planned to use any proceeds from the auction. Bidding started at $500 and was increased in $100 increments. Bidding began with the first turtle, “Blu-Too”, grossing $4,000 to kick off the auction. No turtle went for less than $2,800. A few friendly bidding wars broke out over several turtles. Turtle #5, “Sir Franklin McConkey” was the first one to cross over the $5,000 threshold. It was an intense showdown between the owners of McConkeys Jungle Shack (who also sponsored the turtle) and local business owner Robert Redfearn. In the end, Redfearn won out bringing in $9,000 for Sir Franklin’s non-profit, the Edisto Island Community Association.

The next friendly battle came over Turtle #8, “Myrtle”. Myrtle was painted by local artist Gerry McElroy. Sponsor John Sigler with Carolina One Edisto Vacation Rentals was getting his turtle back, no matter the cost. In an entertaining showdown between Sigler and one other bidder, Carolina One won out, making a forever home for “Myrtle” and grossing $8,500 for the Edisto Island Youth Recreation group.

The most impressive win for the day went to the Edisto Beach Loggerhead Turtle Project. Also perhaps the most fitting, seeing as how they were also a partner in the Turtle Tide Art Project. Turtle #9, “Ebby”, brought in an impressive $12,000 to benefit the Loggerhead Project. “Ebby” was sponsored by VACASA Edisto and painted by VACASA employee Courtney Vesser. The Edisto Beach Loggerhead Turtle Project had two turtles benefitting them and grossed over $16,000 from the event to put towards further protection and conservation of our Loggerheads.

The turtles brought in a total of $60,100 that stays within the Edisto community by supporting 8 local charitable organizations. You can find more information on all of the turtles and how much they raised here:

In addition to the generosity of our donors, the day was made successful by all of our volunteers, our project partners, sponsors, artists, and non-profits involved. You can read more about the start of the project here. THANK YOU to everyone involved in making this project a success!